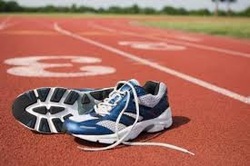 Toni Cade Bambara was a writer and social activist who attended Queens College, City University of New York and City College of New York. She was born on March 25, 1935 and died December 9, 1995.

http://en.wikipedia.org/wiki/Toni_Cade_Bambara
http://www.gradesaver.com/author/toni-bambara/
SUMMARY
This is the story of Squeaky, a young girl who considers herself to be the 'fastest thing on two legs'. (Bambara, 1) Squeaky's life consists of two things; taking care of her brother Raymond and constantly training for track. Squeaky, in training for the May Day races in the park, decides to go for a walk/ training session and takes Raymond with her. She encounters her rival, Gretchen, along with her 'shadows' (Bambara, 3), and they spar verbally. Squeaky and Raymond continue on their way, and purposefully arrive late for the May Day races. While collecting her number, she is asked, in a very round-about fashion, to give some-one else a chance at winning. She does not react well to this suggestion. While on the starting block and realizes that Raymond is in position, on the other (www.bulbsoup.com) side of the fence, to run with her. He impresses his sister by keeping up with her, which leads her to start thinking of retiring from track and becoming Raymond's trainer. The story ends with Squeaky not only winning the race, but gaining respect for her rival and considering a myriad of other activities to pursue and conquer.

SETTING
The story is set in Harlem, New York. The time frame is one day in the life of Squeaky.

THEMES
Love and family relationship
This theme is displayed between Squeaky and her brother Raymond. Squeaky is younger than her brother, but is given the awesome responsibility of taking care of him. She rises to the challenge and not only does not complain about being the caregiver of her mentally challenged older brother, but is his champion in every situation. She defends him tirelessly and bravely when anyone dares to tease him. Her love for him is further shown when she observes his skill on the track. She sees that he is talented and immediately starts to envision a future, in track, for him. Raymond returns his sister's love by being a very enthusiastic supporter of her running, he even runs her race with her in a show of support. Just the mention of Squeaky's name over the microphone would send Raymond into a fit of excitement.

Women in Society
Squeaky's relationship with her rival, Gretchen, highlights this theme. Squeaky points out that 'Gretchen smiles, but it's not a smile ... girls never really smile at each other because they don't know how ... grown-up girls don't know either.' (Bambara, 3). This thought, by Squeaky, emphasizes the fact that girls are not encouraged to support each other, but to be competitive and to place all their time into refining the roles that they are assigned based on their gender. It is implied that Gretchen and Squeaky, after the race, learn to respect each other, 'We stand there with this big smile of respect between us ... like being people.' (Bambara, 7).


TECHNIQUES
Juxtaposition - Squeaky and her brother Raymond are juxtaposed in this story. Raymond is older yet younger and Squeaky is younger yet older. This contrast serves to highlight that Squeaky has been asked to become more mature than the average little girl, in order to support and care for her physically older, yet mentally younger brother.

Situational Irony - It is ironic that the younger sibling is asked to take care of the older sibling. The expectation is that the situation is reversed. This irony highlights that the family's dynamic is different because they have a mentally challenged member.

Allusion - Squeaky is referred to as Mercury, by the children in the neighbourhood.  This is an allusion to Mercury, the swift messenger of the ancient Greek gods. He was sometimes referred to as a god of winds. This draws attention to the fact that Squeaky is very fast.