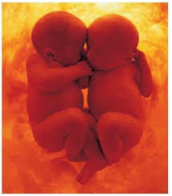 John Wickham, author of 'Blood Brothers', is a graduate of Harrison College, in Barbados. He then went on to do a training course in meteorology, which was a new field in Barbados at the time. He wrote short stories during his time as a meteorologist and contributed some of his work to BBC. He attended Cadbury College in 1956. To discover more about the interesting life of John Wickham, read:

Double Passage: The Lives of Caribbean Migrants Abroad and Back Home by George Gmelch
SUMMARY
This is Paul's story. He tells the reader about the confusing love/hate relationship that he has with his twin brother Benjy. The boys are opposites. Benjy is outgoing and playful, while Paul appears to be more introspective and artistic. Despite the fact that Paul feels, and declares, hatred for Benjy, he also (www.bulbsoup.com) feels admiration and love. Benjy encounters Paul under the casuarina tree and persuades him to go with him to Mac's shop. At Mac's shop, Benjy tries to get Paul to play, but Paul ends up pushing him and running away.

SETTING
CHARACTERS
Paul
Benjy
Father
Mac
THEMES
Love and family relationship
The theme of love and family relationship is highlighted through Paul's contrasting attitudes towards his brother; he loves and admires Benjy, but he also hates him. Paul admires his brother because he is so carefree, but despises him for this very same fact 'the love he bore his brother, the admiration he had for his popularity and the twinkling smile in his eye contending in his heart with his own envy, the timid sense of his own timid spirit and his own tongue-tied shyness; and out of the turmoil inside him, there sprouted his own violent hate.' (Wickham, 46). Therefore, the relationship that he has with his brother is a very complex one. He both loves and hates his brother at the same time. This contrasting combination of feelings is very (www.bulbsoup.com) confusing for a teenager. The reader also sees, however, that Paul actually yearns to forge a great relationship with his twin, his blood brother, but fear holds him back ' He yearned with every fibre of him ... to share with Benjy the secret ways of his heart ... he was afraid that Benjy would reject his offer.' (Wickham, 45). So even with the declarations of hatred, there is evidence that Paul, at least, wants to have a healthy relationship with his twin.

Therefore, the complex love/hate relationship is a one sided one, where Paul has dual feelings about his brother. Benjy, however, appears to be unaware of this duality of emotions that Paul feels for him. Benjy is presented as all boy, full of rambunctious energy, and unaware of nuances of emotion. Therefore, when Paul attacks him at Mac's shop, it takes him completely by surprise 'Then he saw the look of incomprehension on his brother's face, the look of why, what have I done, the look of puzzlement and surprise.' (Wickham, 47). Benjy sees his brother, Paul, simply as a playmate, an equal in his quest for enjoyment. This is so because he is always trying to include Paul in his activities. Therefore, it can be surmised that there is a possibility of a true bond between these twins, these blood brothers, but it is hindered by Paul. This is the case because Paul cannot seem to resolve his dual emotions for Benjy.

It is ironic that the story is called blood brothers because the title implies loyalty. When the reader delves into the story and realizes that a bond that should exist, simply by virtue of the two boys sharing the same womb, does not, it is almost disappointing. However, the relationship between the boys, especially how Paul relates to Benjy, highlights the complexity that is possible within family structures, and particularly between twins.

Innocence vs. Loss of Innocence
Benjy appears to be the innocent bystander in this short story. He is completely unaware of his brother's hatred towards him. Paul, too, is innocent in this story. He simply does not have the emotional tools to manipulate the complexity of the emotions that he feels. Both boys are thirteen years old, and are bonded, at least from society's perspective, by the fact that they are twins. People do not expect them to disagree and fight, as is seen in Mac's view that the boys were playing, instead of fighting, in his shop. Both boys lose their innocence, however, by the end of the story. This is the case because Benjy becomes aware of the fracture in (www.bulbsoup.com) the relationship between himself and Paul, and it becomes clear to Paul that the wall of perfection that had once separated him from Benjy does not exist. Benjy, like him, also feels fear. Both boys are now on equal footing in their relationship and, it is implied, that they can now start the journey to become true blood brothers.


TECHNIQUES
Juxtaposition - Benjy and Paul are juxtaposed against each other through the fact of them being physically alike, yet psychologically different. Benjy is carefree while Paul is introspective.

Situational Irony - It is ironic that the twins are so very different, when we expect them to be similar in all ways. This expectation is entirely based on the fact that they are twins.​