Please note that the information given on this poem is not meant to replace any material given in the classroom setting. It is a very BASIC giude to enable a literal understanding of the poem. Metaphorical interpretations should be sought in the classroom.
LITERARY DEVICES
1. SIMILE
2. ALLUSION
3. SARCASM 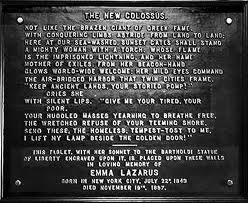 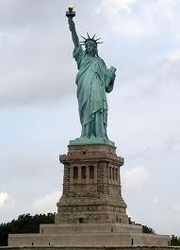 4. PUN
Line 17-18: The pun is placed on 'land of the free', it becomes 'Island of the free'. This pun emphasizes how isolated Puerto Rico is from the rest of the Caribbean islands. It belongs to the U.S.A. This state of belonging to, or being owned by the US is asserted through it's insertion into the Star Spangled Banner.

IMPORTANT WORDS/ PHRASES
5. 'plush'
This word implies soft, like a teddy bear. It also implies luxury. So San Juan is all of these things.
6.'desperate blacks might re-enslave this Island of the free'
These 'desperate blacks' to whom the persona is referring are the poor people of the Caribbean. If they converge on the glistening San Juan, sucking up its resources, then it might become re-enslaved by poverty.
7.'America's back yard'
A backyard means one of two things for people. It is a haven where you relax, therefore you decorate it and invest time and money in it. Or, you ignore it and spend all your time indoors, not investing any time, energy or money in it. America viewed Puerto Rico as the latter, a prize in which it saw value. Therefore, when the persona uses this phrase, he is implying that while it is valued, it is still at the back. Slight sarcasm is being used here.
8.'the contrasts tantalise'
When something, or someone, is tantalising, it implies that it is intriguing. The persona, by using this phrase, is trying to draw the readers attention to to the jarring contrasts by stating that he finds them intriguing.
9.'fierce efficiency'
The word fierce, used to describe the level of efficiency with which the people worked to get the plane off the ground, shows the extent to which they were not wanted on the island.
10.'fools-glitter'
This implies that the flashiness of San Juan was not authentic.
11.'It's sharp and jagged and dangerous, and belonged to some-one else.'
This implies that San Juan is not safe. The cultures are not melding, but jarring against each other. The reason for this is because it belongs to someone else.

MOOD/ ATMOSPHERE
The mood of the poem is perturbed.

TONE
The tone of the poem is slightly bitter, which is fueled by the sarcastic atmosphere.