BECAUSE I COULD NOT STOP FOR DEATH - Literature Notes

Please note that the information given on this poem is not meant to replace any material given in the classroom setting. It is a very BASIC giude to enable a literal understanding of the poem. Metaphorical interpretations should be sought in the classroom. 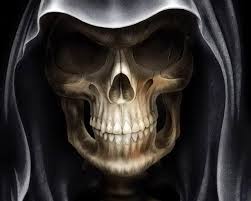 ﻿2.Because I could not stop for Death -
He kindly stopped for me﻿ -
The Carriage held but just Ourselves -
And 4.Immortality.

5    We slowly drove - He knew no haste
And I had put away
My labor and my leisure too,
For 5.His Civility -

3.We paused before a House ﻿that seemed
A Swelling of the Ground -
The Roof was scarcely visible -
20    The 7.cornice - in the Ground -

8.Since then - 'tis Centuries - and yet
Feels shorter than the Day
9.I first surmised the Horses' Heads
Were toward Eternity -
Dickenson, Emily. 'Because I Could Not Stop for Death' in A World of Poetry. Edited by Mark McWatt and Hazel Simmonds McDonald. Pearson Education Ltd, 2005.

This is the OPINION of one individual, which might not coincide with the views of others.﻿
LITERAL MEANING
The poem is about a female persona who is taken for a carriage ride by a suitor, who happens to be death.  She says that she could not stop for him, so he stopped for her instead.  The occupants of the carriage are the persona, death and immortality. They take a leisurely ride, which the persona facilitates, by putting away her work and fun activities because death is so polite. They rode past a school, fields and the setting sun, and by early morning the persona started to feel a chill.  They paused at a house, which was the persona's grave, and centuries pass. The persona muses that the centuries that have passed seem shorter than the day that death came for her.

LITERARY DEVICES
﻿1. PERSONIFICATI﻿ON﻿
2. SARCASM
Lines 1-2:  The persona states that because she could not stop for death, it kindly stopped for her. There is nothing 'kind' about death.  It does not give you a choice and it is the equalizer of men.  When the persona uses the word kindly, it is, in fact, to emphasize the unkind nature of death.  You simply have no choice in whether you go with death, or refuse him.

3. EUPHEMISM
The poet replaces the word cemetery with the word house.  He has softened the word.  The effect that this device has to make death seem tame.  It, or in this case he, almost seems charming.

IMPORTANT WORDS/ PHRASES
4. 'immortality'This word literally means eternal life.  Therefore, the persona is in a carriage with death and eternal life.  The presence of eternal life, however, does not seem to nullify the power that death holds over the persona.
5. 'his civility'
This word means formal politeness and courtesy in behaviour.  The implication is that these words characterize death, he is a gentleman.  This character trait helps to soften death in the eyes of the reader.
6. 'For only Gossamer, my Gown - My Tippet - only Tulle -'
The persona's gown was made of gossamer (a fine, filmy substance consisting of cobwebs that is seen in autumn), while her tippet (scarf or shawl) was made of tulle ( A soft, fine silk, cotton, or nylon material like net, used for making veils and dresses).  This implies that the persona was unprepared for the early morning weather, as well as for death.
7. 'cornice in the ground'
A cornice is an ornamental moulding round the wall of a room just below the ceiling. The fact that this house's cornice is in the ground tells us that the 'house' is actually the persona's grave.
8. 'since then - 'tis Centuries'
This tells the reader that a lot of time has passed since death took her, implying the the persona is dead, and speaking from the grave.

TONE
The tone of the poem is one of acceptance.

MOOD
The mood of the poem is calm